Above each individual’s kidney lies the small, pyramid-shaped adrenal gland. 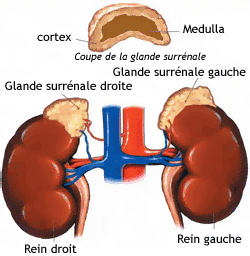 The main glucocorticoid hormone secreted by the adrenal glands is called cortisol (or hydrocortisone). This hormone plays a crucial role in the regulation of major body functions (glycemic metabolism, immune system, inflammation). Given the importance of these functions in everyday life, cortisone is a vital product of the human body.

The anti-inflammatory properties of this natural hormone intrigued physicians upon its discovery as natural cortisone was found to be an effective way to treat certain inflammatory or allergic diseases. Doctors successfully synthesized drugs that imitated the effects of natural cortisol. Today, these “synthetic glucocorticoids” are prescribed as prednisone and prednisolone

The general public and physicians commonly refer to these “synthetic glucocorticoids” as “steroids” or “cortisone”.